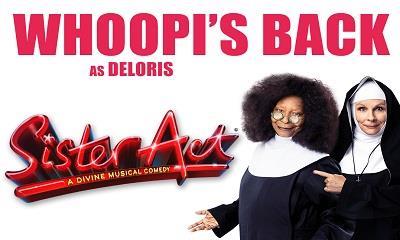 Whoppi Goldberg and Clive Rowe will be seen acting together in Sister Act at the Eventim Apollo this summer. Whoppi Goldberg performed the role of Mother Superior in the musical at the West End’s London Palladium, previously.  In the revival of Sister Act Olivier Award winner Rowe will perform as the police chief (Eddie Souther) who suggests Deloris, the character played by Whoopi Goldberg, to join a witness programme and she ends up in a convent.

Clive Rowe has also worked in Sweet Charity, Chicago In London, carousel. His role in Guys and Dolls musical at the National Theatre made him win an Olivier Award for best supporting actor in a musical.

Jennifer Saunders (Comedian and actor) is also the part of Sister Act’s cast of London and she is going to play the role of Mother Superior with Brenda Edwards who is playing the role of Deloris van Cartier. The newly updated version of the Sister Act will be played for the first time at the Leicester Curve in April, before embarking on the journey of UK tour with a stay in London in July.

Sister Act will be played at the Eventim Apollo from 21st July 2020.