Musical
Important Information
Children under 5 will not be admitted.

Age Recommendation: Parental discretion advised. Please note that this production contains some strong language and mild sexual references. Recommended for ages 14 and above.

E-Tickets
Online Venue Check-In: Please note you will be contacted by the venue 48 hours before the performance with instructions on how to check-in and retrieve your e-ticket.

More about Everybodyâs Talking About Jamie

Out of the darkness…into the spotlight…back to the place where we belong.
Be one of the first to see Everybody’s Talking About Jamie as it triumphantly returns to the Apollo Theatre this May, making it one of the first major musicals to reopen in London! With a hotly anticipated new film adaptation due to be released this year, everybody’s talking about our fabulous return!
Inspired by a true story, Everybody’s Talking About Jamie is the award-winning hit musical for today – bang up to date, more relevant than ever and specially updated for the times we live in.
Jamie New is sixteen and lives on a council estate in Sheffield.
Jamie doesn’t quite fit in.
Jamie is terrified about the future.
He is going to be a sensation.
Supported by his brilliant loving mum and surrounded by his friends, Jamie overcomes prejudice, beats the bullies and steps out of the darkness, into the spotlight.
Noah Thomas, Melissa Jacques, Sejal Keshwala, Hiba Elchikhe and Gillian Ford, are joined by EastEnders star Shane Richie, who reprises his role as Hugo/Loco Chanelle, as the show returns to the West End. With a twenty-five strong company and a nine-piece band, this will ‘sweep you away on a tide of mischief, warmth and exuberance’ (Financial Times).
With ‘songs that have the wow factor’ (The Times) by lead singer-songwriter of The Feeling, Dan Gillespie Sells, and ‘hilarious’ book and lyrics ‘with delightful punch’ (Whatsonstage), by writer Tom MacRae, this funny, feel-good, musical sensation is ready to be your much-needed glitter in the grey as it reopens at the Apollo Theatre from May this year.
Shane Richie will star as Hugo/Loco Chanelle until July 18.
Critic Reviews


‘THIS FIZZING MUSICAL IS A BLAST OF FRESH AIR’ -THE TIMES

'SWEEPS YOU AWAY ON A TIDE OF MISCHIEF, WARMTH AND EXUBERANCE' -FINANCIAL TIMES

'IRRESISTIBLE: A JOYOUS, LIFE-AFFIRMING BILLY ELLIOT' -THE INDEPENDANT / I

‘OUTRIGHT HILARIOUS’ ‘THIS SHOULD RUN AND RUN.’ -LONDON THEATRE

'ONE OF THE BIGGEST AND BEST SHOWS OF THE YEAR' -ATTITUDE

'A DYNAMIC, DELICIOUSLY ENTERTAINING NIGHT OUT, A GLORIOUS TRIBUTE TO WHAT MAKES US HUMAN AND A HEART-WARMING APPEAL FOR ACCEPTANCE. LET’S ALL KEEP TALKING ABOUT JAMIE FOR AS LONG AS POSSIBLE.' -WHATSONSTAGE

Why book Everybodyâs Talking About Jamie Theatre Tickets with us?

Everybodyâs Talking About Jamie has a new cast in the West End
Published On Fri, 28 February 2020 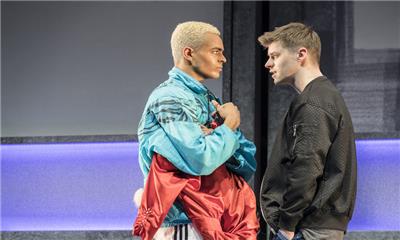 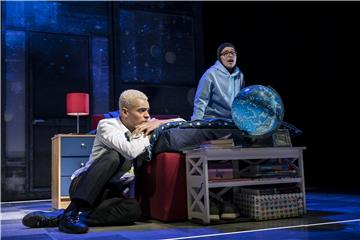 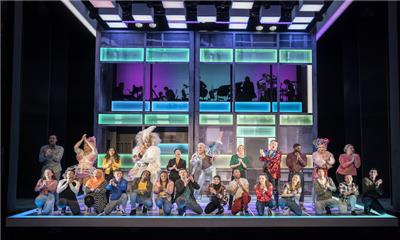 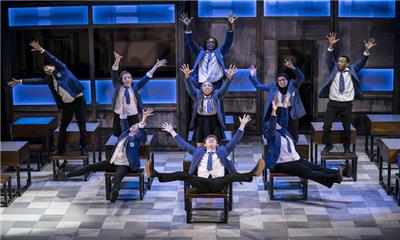 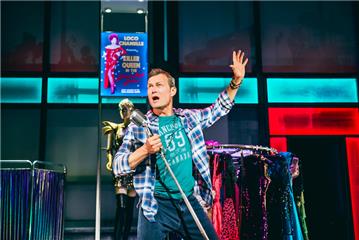 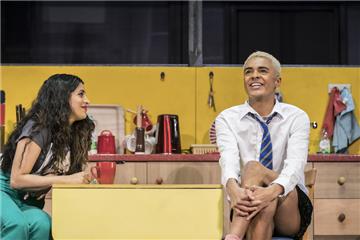 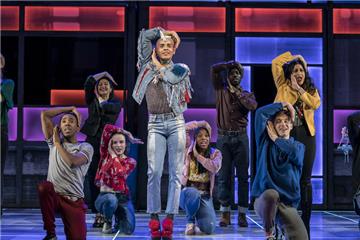 Access description: 8cm step into the foyer through swing double doors. Box Office counter on the left. 22 steps down from foyer to Stalls, 12 up to the Dress Circle, with 2 steps between rows in the auditorium. 35 steps up to the Upper Circle and 75 to the Balcony. Handrails on both sides of the staircases. Stairlift to stalls access through double doors to the left of the upper circle entrance on Shaftesbury Avenue. Stairlift or 12 steps down to the stalls. Theatre open 30min before the start of the performance.

Guide Dogs: Guide dogs allowed into the auditorium and staff are also available to dog sit. Dogs will be looked after in Stalls bar or in manager’s office. Maximum 2 dogs at a time.

Disabled Access: On arrival please report to the Main Entrance. A member of staff will then accompany you to the wheelchair access entrance on Shaftesbury Avenue where there is a platform lift to the Stalls level of the Auditorium. 2 spaces for wheelchair users in seats F1 and G1 in the Stalls. Wheelchair transferees can be accommodated in Stalls. Recommended seats are E1, H1 and J1 but other seats are available. Wheelchairs are stored near auditorium right Stalls level. Venue not suitable for scooters. Auditorium is carpeted with steep raking.

Toilets: Adapted toilet to the rear of the Stalls level. 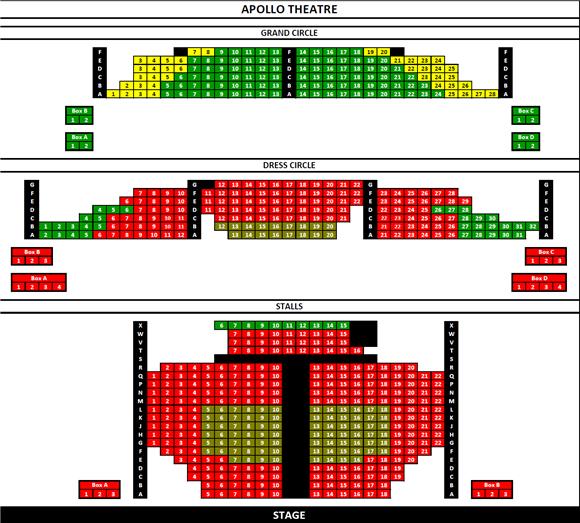