9 to 5 The Musical Tickets

Dolly Parton will not be appearing in this production. Sean Needham will play Franklin Hart Jr from 10th-29th February, with Brian Conley rejoining the cast of 9 to 5 from 2nd March.

Please note: Louise Redknapp will not be performing from 12th to 30th March 2020.

9 to 5 The Musical Tickets With Dinner

More about 9 to 5 The Musical

Nothing can be more toxic than a 9 to 5 job routine but not in case of 9 to 5 The Musical so if you are tired of your day to day routine, this engaging musical will not only rejuvenate you but exhilarate you as well. West End’s Savoy theatre is offering you the chance to relish 9 to 5.

Based on the 1980 hit movie starring Dolly Parton, 9 to 5 The Musical has come to London after a UK tour and London Fringe Premiere. With the characters you loved from the film, songs (music and lyrics) by Dolly Parton herself, and a book by Patricia Resnik, 9 to 5 tells the story of 3 working women who find their voices and take control. Dolly Parton’s Oscar, Tony and Grammy Award-nominated score comes to life on stage.

‘PACKED WITH LAUGHS AS BIG AS DOLLY’S PERSONALITY.’ -DAILY MIRROR

Why book 9 to 5 The Musical Theatre Tickets with us?

9 to 5 The Musical Customer Reviews

Some performances weaker than others.

Brian Conley and Louise Redknapp performing again in the West Endâs 9 to 5 The Musical
Published On Wed, 15 January 2020

Access description: Access to the main auditorium through a side entrance from the Embankment side of Carting Lane. The Box Office can provide a map showing the route (approx. 100m from main entrance). Carting Lane is fairly steep – helper needed, please inform the Box Office at the time of booking and contact the Stage Door on arrival. From here, access is level to the front of the Dress Circle. 2 spaces for wheelchair users on the right hand side. Companions can sit nearby in F1 or 2. Transfer seating is available to F1 in the Dress Circle. Each wheelchair user must bring a non-disabled companion with them. Call 0207 845 6050 for assistance.

Guide Dogs: Guide dogs allowed in the auditorium or staff will dog-sit by prior arrangement office. Dogs will be looked after in the Manager’s Office.

Disabled Access: No steps to Box Office through 3 sets of double doors which open inwards. Box Office counter is to right. From a door beside the foyer entrance there are 2 steps into the Upper Circle. 33 steps down to Dress Circle (2 steps between rows), 71 down to Stalls. Staircases have handrails on both sides. Separate entrance for wheelchair users or special needs at street level via a ramp from Carting Lane.

Toilets: Women’s and men’s toilets are 20 steps up from the Dress Circle, between Dress Circle and Stalls, at Stalls level and at Upper Circle level.

Disabled Toilets: Adapted toilet to the right of the Dress Circle 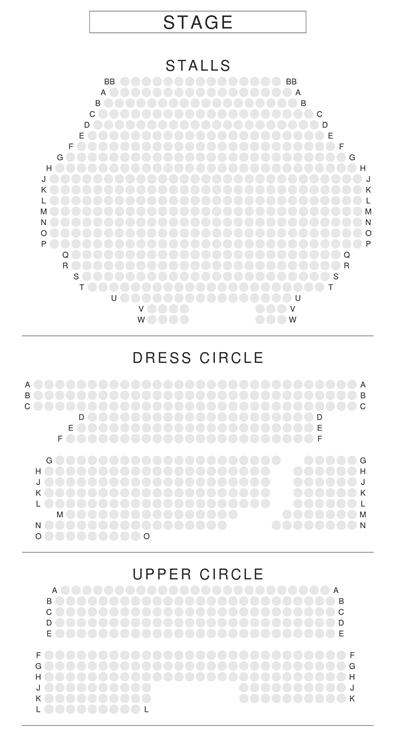