More about Pretty Woman The Musical

One of Hollywood’s most beloved stories of all time is now coming to the West End! Pretty Woman: The Musical features direction and choreography by two-time Tony Award® winner Jerry Mitchell (Kinky Boots, Legally Blonde, Hairspray), an original score by Grammy® winner Bryan Adams and Jim Vallance (“Summer of ’69”, “Heaven”) and a book by the movie’s legendary director Garry Marshall and screenwriter J.F. Lawton.

The story revolves around the two main characters Vivian Ward and Edward Lewis. Ditched by his girlfriend, Edward Lewis a rich and successful businessman encounters Vivan Ward a free spirited prostitute, while roaming in Hollywood’s red light area and hired her to accompany him in number of social gatherings during his stay in the city. They develop a unique chemistry combined with romance and open up to each other unconsciously. The fascinating love story is now on stage as a musical making it even more delightful for the audience.

Why book Pretty Woman The Musical Theatre Tickets with us?

Very good musical with excellent singing and dancing, storyline just like the film.

Great fun! True to the film, with the addition of great songs.

Full Cast of The Pretty Woman Announced for the West End Premiere
Published On Fri, 10 January 2020

Access description: 1 shallow step up from the pavement through the central and right-hand doors into the foyer (no step at the left-hand doorway). Box Office counter on the left. No steps to Royal Circle from Sherwood Street entrance (see Wheelchair Access), or up 6 steps from the foyer. Stalls are down 15 steps, Royal Circle up 28 steps (2 steps between rows), Grand Circle up 70. Staircases have handrails on both sides.

Sound Amplification: Induction loop at Box Office and infra-red system in the auditorium.

Guide Dogs: Guide dogs are not permitted inside the auditorium. Staff are happy to look after 2 guide dogs per performance.

Disabled Access: Via side entrance in Sherwood Street into a box (entrance is 65cm wide) which has space for 2 wheelchair users and their companions. 2 more wheelchairs can be accommodated in row A of the Royal Circle. The view of the left-hand side of the stage is slightly restricted. Stage left is slightly restricted. Access to transfer seating at A25-28 in the Royal Circle is through the same EXIT door in the Sherwood Street yard up one 8cm step. Scooters users allowed in the venue, but must move to transfer seats. 4 wheelchairs or 2 scooters can be stored next to the Royal Box. If you need help with transferring you should bring a companion. 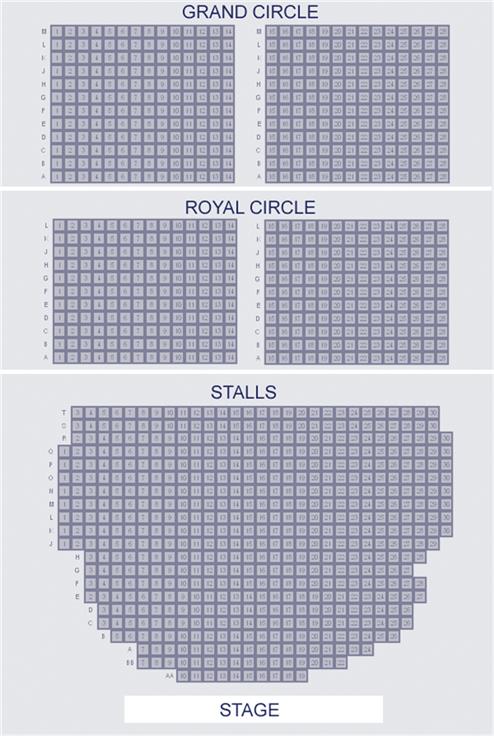