THE DEATH OF A BLACK MAN Tickets

More about THE DEATH OF A BLACK MAN

BY ALFRED FAGON
DIRECTED BY DAWN WALTON
“At least I am my own boss. No regrets. I choose what I do. I am lucky.”
It’s 1973, and the King’s Road is the epicentre of everything that’s cool and happening in the world. Shakie, an 18-year old super-smart wheeler-dealer, is in his element hustling dodgy African furniture and is starting to make some serious money. His best friend Stumpie is developing a grand scheme for a London festival of Black music which, with Shakie’s backing, is going to make them both super-rich. So when Shakie’s older ex-lover Jackie arrives at his Chelsea flat on a visit, the trio toast the future in champagne.
But the boys have been living it large for too long and they’re heading for dangerous territory…
Alfred Fagon, for whom the premier Theatre Award for Black British writers is named, was an actor, poet and playwright. The Death of a Black Man was premiered  at Hampstead Theatre in 1975, the first work by a Black British writer to be presented there. 45 years on, the play, with its dark exploration of sexual politics and the post-colonial legacy, is still compelling viewing.
Dawn Walton was the Founder Artistic Director of Eclipse Theatre. She makes her Hampstead Theatre directing debut following The Gift (Theatre Royal Stratford East), Red Dust Road (NT Scotland) and Black Men Walking (Royal Court).
The Death of a Black Man is part of Hampstead Theatre’s Classics Season, celebrating 60 years of original theatre with the restaging of four major plays from our archive.
‘A difficult – because painful – exploration of West Indian identity in white capitalist society.’
W Stephen Gilbert, Financial Times on the original Hampstead Theatre production of The Death of a Black Man
‘Fagon’s writing is sharp, funny, unpretentious... (his) view of the black predicament is complex, thoughtful and compassionate’
Andrew Rissick, Time Out

Why book THE DEATH OF A BLACK MAN Theatre Tickets with us?

Eton Avenue, Swiss Cottage, London, NW3 3EU
View Seating Plan
We have a modern auditorium which has been designed to be as flexible as possible in both staging and seating configurations.

The seating capacity can range up to 325, in a variety of formats. There are two main seating areas: Ground Floor (stalls) and Upstairs (circle). On the Ground Floor there is also a mezzanine level, the back row of which are stool seats: higher seats complete with footrests.

Movable seating blocks also allow for the auditorium to be changed from a more traditional end-on configuration with a raised stage, to thrust or traverse layouts where the audience is level with the performance area.

The forestage can be raised, or lowered to allow for an orchestra pit. The main section of stage can also be raised or lowered to change the relationship between performers and audience or to create a rake on stage, and contains removable sections for creating traps. The auditorium is fully air-conditioned. 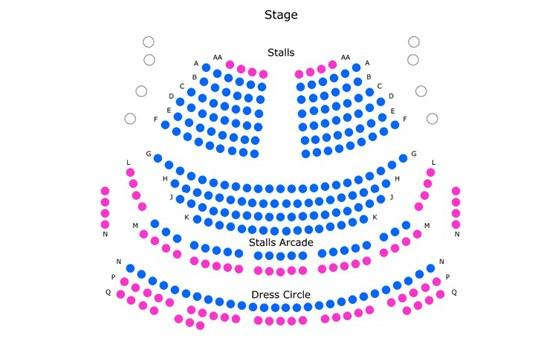 THE DEATH OF A BLACK MAN