The award-winning musical Taboo by Boy George returns to London for one night only to celebrate the 20th anniversary of the show’s original production. This star-studded charity concert featuring members of the original cast is in aid of the Terrence Higgins Trust and Shelter.

What is Taboo about?

Taboo is a love story played out against the fantastic background of the nightclub that came to symbolise the excess and decadence of 1980s London, and subsequently defined a generation. These were the leaders of a phenomenon which left a lasting influence on both the face and fate of pop, fashion and social culture.

With music and lyrics by Boy George and Kevan Frost, Book by Mark Davies Markham and direction by the original West End and Broadway Director Christopher Renshaw.

Don’t miss your chance to see this incredible concert of the world’s most outrageous, vibrant and infectious musical and book your Taboo tickets today!

Why book Taboo Theatre Tickets with us?

We are the official ticket partner to Taboo playing at London Palladium. We strive to offer Taboo theatre tickets at best price. With our interactive seat plan you can easily choose your favourite seats and our flawless secure payment system ensures a hassle free checkout process for Taboo theatre tickets booking.

Access description: From entrance foyer to Stalls: Up 3 steps, down 12 steps. Down ramped corridor to auditorium. To Royal Circle: Up 26 steps to auditorium, then down steps towards front row (potentially 20 steps). To Upper Circle: 47 steps to bar, further steps depending on seat location.

Guide Dogs: Guide dogs allowed into the auditorium in aisle seats and boxes only. Staff available to dog-sit.

Disabled Access: Press intercom on box office door for ramped. Alternative entrance off Ramillies Place, at the back of the theatre – please notify the Palladium host in advance. No steps to back of Stalls, although the auditorium is on a fairly steep rake. 4 spaces for wheelchair users at L46, O48, Q48 and S49. Companions can sit in same row. Transfer seating available to aisle seats. Chairlift from Box Office to Stalls available.

Toilets: 15 steps up from the foyer to the women’s and men’s, or 12 steps down from the main entrance to Stalls toilets.

Disabled Toilets: Adapted WC on the right inside Ramillies Place entrance, near rear of Stalls. 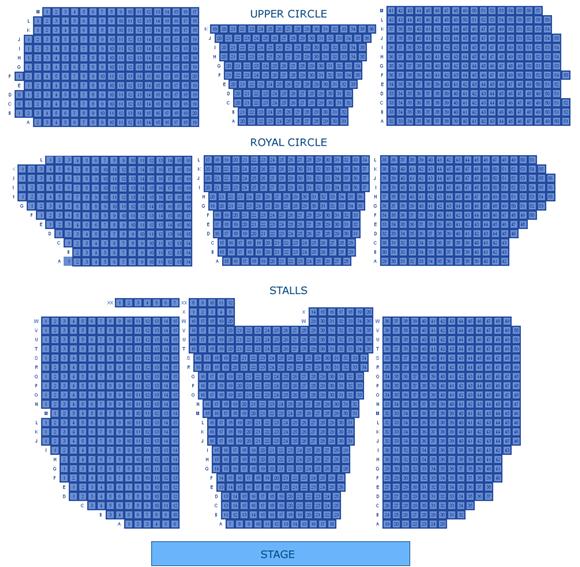