This Autumn/Winter season head to the Menier Chocolate Factory London’s The Mixing Room for a brilliant British comedy that you just have to see! Written and performed by Harry Peacock and Dan Skinner, based on the original podcast, you’ll want to make sure you secure your tickets for Brian & Roger – A Highly Offensive Play whilst the best availability lasts.


Brian and Roger meet at a support group for recently divorced men. On one hand, we have Roger who is genuinely suffering with the loss of his marriage, whereas, Brian, is obliging the meetings at the instruction of his solicitor so as to avoid paying alimony. However, both of them are starting again and both find it hard. Roger needs the support and guidance, and Brian is happy to give it.

The play stars Harry Peacock in the role of Brian. Peacock’s theatre credits include His Dark Materials, Cyrano de Bergerac (National Theatre), The Ladykillers (Gielgud Theatre), As You Like It (Sheffield Crucible). His television credits include Toast of London, Star Stories, The Kennedys and Kingdom. His film credits include Gulliver’s Travels, Far from the Madding Crowd, Cinderella the Musical and Judas.

Why book BRIAN & ROGER Theatre Tickets with us?

53 Southwark Street, London, SE1 1RU
View Seating Plan
Throughout its history, the Menier Chocolate Factory building has been inspired by both individuality and the pursuit of quality. Built in 1870 to house a chocolate factory, this unique space now comprises a restaurant and bar, rehearsal room and 150 seat theatre. Having maintained the original exposed wooden beams, unusual cast iron columns and an amazing brick feature interior, the Chocolate Factory is a stimulating environment to enjoy a high-quality and entertaining theatrical experience.

There are 16 steps down to the male and female toilets, and 3 steps up to the theatre box office.

Disabled tolilet - kept locked, and has no alarm cord, but does have grab rails and a low level basin.

The entrances to the cafe and the gallery areas both have 3 steps and automatic doors. There is a ramp to the right of the cafe entrance which leads to a fire door, which can be opened to give level access to the cafe, and from there the gallery can also be accessed. 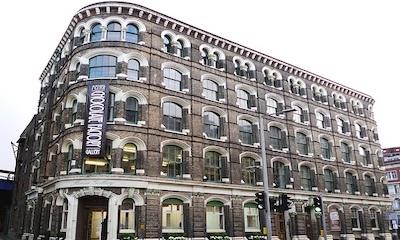