The biggest stars from London’s West End are celebrating the festive season in WEST END MUSICAL CHRISTMAS live at the Lyric on Monday 20th December.

The ultimate festive celebration for musical theatre fans, featuring all of your favourite Christmas and show-stopping numbers performed by an incredible cast of West End stars, with a live band and dance ensemble.

The all star line up includes West End & Broadway sensation John OwenJones (Les Miz, Phantom) the UK’s youngest ever ‘Jean Valjean’ and longest-running ‘Phantom’, Emma Hatton (Wicked, Evita) who rose to fame playing the iconic Elphaba in Wicked, Oliver Ormson (Frozen, Book Of Mormon) currently starring as Prince Hans in Frozen, Jodie Steele (Heather’s, Six) currently starring as Heather Duke in Heathers, Obi Ugoala (Frozen, Hamilton) currently starring as Kristoff in Frozen after playing George Washington in Hamilton, Idriss Kargbo (Wicked, Lion King) former Boq in Wicked and your host Shanay Holmes (Get Up Stand Up, The Bodyguard) who is currently originating the role of Cindy Breakspeare in Get Up Stand Up, with more special guests to be announced...

Get ready to sing and dance along at the biggest Christmas party the West End has ever seen!

We wish you a musical Christmas

Why book West End Musical Christmas Theatre Tickets with us?

Access description: Access to the Box Office is by three foyer width steps and one small step at the main doors with handrails on either side. There are no steps between the ticketing entrance and the Dress Circle doors. Inside the Dress Circle level there are 5 steps leading to seats. There are 32 (26 from level access entrance) steps leading down into the Stalls level. There is a tall staircase leading to the Upper Circle and Balcony levels. All steps inside the auditorium are highlighted.

Guide Dogs: Guide dogs are welcome in the auditorium, although we recommend an end of row or box seat for their comfort. Staff available to dog-sit. We can take 2 dogs at any one time and advance booking is recommended.

Disabled Access: Entrance is through the left-hand double EXIT door (Royal Entrance) as you face the theatre. Level access to Boxes E, D and C. Boxes C and D can accomodate 1 scooter or wheelchair plus guest. Box E can accomodate 1 scooter or wheelchair plus 2 guests or 2 scooters or 2 wheelchairs.. Slightly restricted view. Transfer seating available to Dress Circle (up 6 steps from Royal Entrance). Wheelchairs stored in cloakroom or front of house store, on Dress Circle level. Venue suitable for scooters – please check when booking. Senior members of staff can assist further in the purchase of refreshments and programmes.

Disabled Toilets: Adapted toilet on the left inside the Royal entrance in the Royal Retiring Room 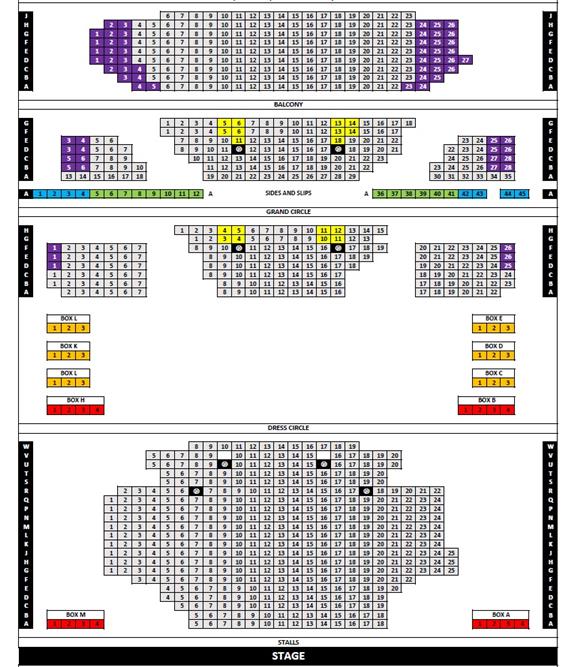