More about The Da Vinci Code

The blockbuster story that captivated the world is now an epic stage thriller. You won't want to miss you chance to see stars or the silver screen bring your favourite page turner to life on stage. Coming to The Churchill Theatre in Bromley for a strictly limited 8 show run!

The curator of the Louvre has been brutally murdered, and alongside his body are a series of baffling codes. Follow the pulse-racing journey as Professor Robert Langdon, played by Television favourite Nigel Harman (EastEnders, Hotel Babylon) and fellow cryptologist Sophie Neveu (Hannah Rose Caton) attempt to solve the riddles, leading to the works of Leonardo Da Vinci and beyond, deep into the vault of history. With guidance from teacher and friend Sir Leigh Teabing, played by family favourite Danny John-Jules (Red Dwarf, Death in Paradise), Langdon and Neveu embark on a breathless race through the streets of Europe. The pair must decipher the labyrinthine code before a shocking historical secret is lost forever.

Why book The Da Vinci Code Theatre Tickets with us?

Churchill Theatre is located in Bromley. Opened on 19th July 1977, it came a long way to become one of the most famous live entertainment venues in southeast London.

Inside the Churchill Theatre

Every year, more than 150,000 people visit the theatre. It comprises a comfortable auditorium which features full air-conditioning as well as a seating capacity of 781. Among the building’s other modern facilities are its refreshment kiosks, bars, and large foyers.

The theatre’s diverse programme presents a wide variety of some of the industry’s best dance, musicals, drama, one-night events, family shows, comedy, and pantomime. The top-class technical facilities at the venue also provide the support required to launch the latest productions. Some of these features are extensive facilities for the workshop, two spacious rehearsal rooms, and a massive stage. Churchill Theatre boasts its ‘Bromley Premiere’, which lets the audiences see fresh, newly produced shows before it hits the West End or embarks on a national tour. It also highlights its studio space, which can be used for multiple purposes; from staging comedies and production previews to organising weekly Creative Learning classes.

The building also features a restaurant serving delicious food and drinks that make for a complete pre-show dining experience right from theatre seats. Visitors do not need to leave their comfort zone or rush for orders and miss the curtain up. There are also affordable entertainment-laden dining events at the theatre, which just cannot be missed!

The London Borough of Bromley built the theatre based on the layout by its borough architect’s department. Although created following the style of European opera houses, Churchill Theatre is an excellent example of a repertory theatre. They established the venue on the side of a hill, into the central library complex which overlooked the Library Gardens and Church House Gardens. The building was also created in such a way that it looked small. To achieve this effect, the size and number of the lower levels were concealed by creating the stage below ground level. Staircases descend from the foyer to provide access to the auditorium. Inaugurated by the Prince of Wales, the theatre now runs on a contract basis, which is currently under the possession of the HQ Theatres & Hospitality. 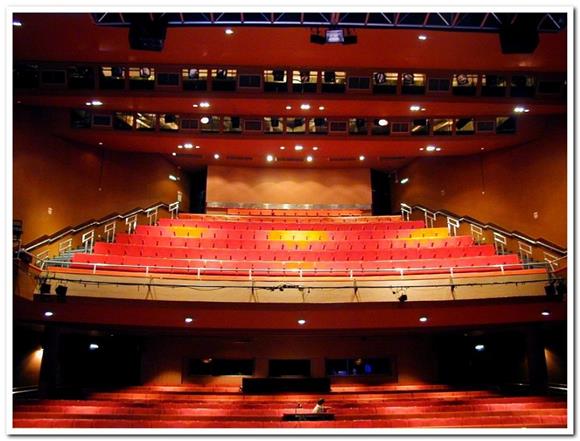