Saturday Matinee West End Favourites Drama Selling Fast Play
Important Information
Special Notes:Please note: This production features instances of flashing lights and some video effects that may cause dizziness. There will be instances of total darkness (lasting 15 seconds) and gunshot sound effects. The production contains moments and themes that some people may find distressing.

More about The Lehman Trilogy

The National Theatre and Neal Street Productions’ The Lehman Trilogy makes a triumphant return to London following an acclaimed season in Los Angeles and a highly lauded run on Broadway, winning 5 Tony Awards® including Best Play. Directed by Academy Award®, Tony Award® and Golden Globe winner Sam Mendes, The Lehman Trilogy features a cast of three playing the Lehman brothers, their sons and grandsons, in an extraordinary feat of story-telling told in three parts on a single evening. Hailed by The New York Times as 'a genuinely epic production', The Lehman Trilogy is the story of a family and a company that changed the world.

On a cold September morning in 1844, a young man from Bavaria stands on a New York dockside dreaming of a new life in the new world. He is joined by his two brothers, and an American epic begins. 163 years later, the firm they establish – Lehman Brothers – spectacularly collapses into bankruptcy, triggering the largest financial crisis in history.

Why book The Lehman Trilogy Theatre Tickets with us?

Access description: No steps through double swing doors into the foyer. Box Office to the right with lowered counter. Escalator up from the main foyer to the mezzanine level and then a further 32 steps up to the Stalls, or 41 to the rear Stalls. 65 steps up to the Dress Circle (3 steep steps between rows). Venue is carpeted throughout and all staircases are highlighted with handrails on either side.

Guide Dogs: Guide dogs are not allowed into the auditorium, however staff are happy to dog-sit (maximum of 2 guide dogs per performance) in the management office.

Disabled Access: No steps to the Stalls area of the auditorium, via a lift (for disabled patrons only) inside the stage door on Parker Mews. Please ask a member of Front of House Staff to accompany you. There is a steep ramp over 2 steps to the lift entrance (58cm wide). From the lift there are 2 swing doors via the backstage area into the auditorium. There are 2 spaces for a wheelchair users at S1 and S2 in the Stalls, companions can sit next to you. Scooter users can access the main foyer, but have to transfer to the theatre's wheelchair to access the auditorium. A maximum of 1 scooter and 2 wheelchair transfer spaces available to aisle or rear stall seats. Wheelchairs will be stored in the Green Room, scooters in foyer.

Disabled Toilets: Adapted toilet en route from the lifts to the auditorium. 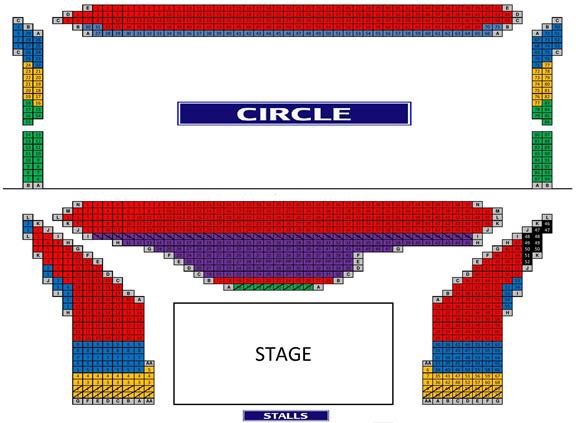