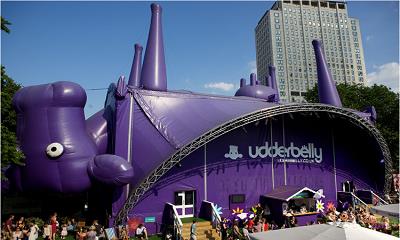 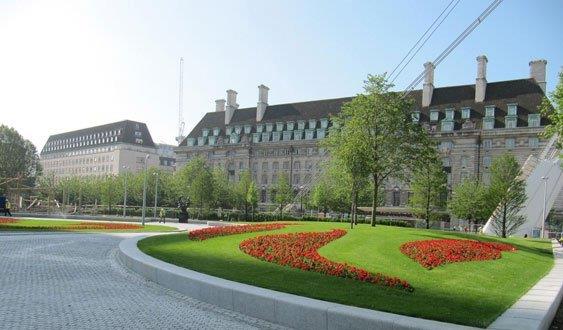 There are currently no shows running at The Belly

The Underbelly tent is situated at Jubilee Gardens, Belvedere Road, close to Waterloo train and tube stations in the heart of central London. A sister venue to the Underbelly theatre in Edinburgh, Udderbelly is completely unmissable, in terms of both the acts it presents and the way that it looks : it’s an enormous purple tent in the shape of an upside-down cow!
This bonkersly bovine 410-seat venue was founded by directors Ed Bartlam and Charlie Wood. It originally opened in 2006 as part of the Edinburgh Festival and has since been spotted grazing happily at the Brighton Fringe.
Now a regular summer fixture in London, the venue is host to the annual E4 Udderbelly Festival at Southbank Centre, an 8 week, annual summer beano comprising circus acts and cabaret shows for all the family. In 2010 the season was extended to 10 weeks and in 2011 the festival played a whopping 13 weeks on the Southbank.
Udderbelly has been an enormous success, quickly establishing a reputation not only for being a great fun destination in its own right, but for hosting the very best in comedy, theatre and music.
A veritable roll-call of the cream of British comedy talent has processed beneath Udderbelly’s magnificent heavenward-pointing teats in recent times, including Marcus Brigstocke, Kevin Bridges, Reginald D Hunter, Sarah Millican, Jon Richardson and Shappi Khorsandi.
The wacky design, cow-lossal size and electric atmosphere of the Udderbelly tent make it the perfect place to see plays, bands and comedians at their finest. Recent successes include The Adventurers Club, Showstopper! The Improvised Musical, Havana Rumba and So Long, Farewell, Auf Wiedersehen, Goodbye.
Whatever you decide to see at the Udderbelly, we wish you an entertaining and rewarding visit.