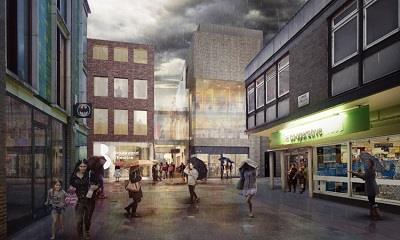 There are currently no shows running at Boulevard Theatre

The original Boulevard Theatre site began as a sister venue to the Raymond Revuebar, running under the same name, and providing additional bar and restaurant facilities alongside gaming tables.

It later became a small theatre in its own right, known as the ‘Elle et Lui’ theatre. Due to the similarity in genre of shows and competition that the ‘Elle et Lui’ theatre created for the Revuebar and the Windmill Theatre, the theatre was closed and reopened as the ‘Boulevard Theatre’, establishing a separate entrance and making it a stand-alone venue.

The Boulevard Theatre presented various productions, including erotica, stand-up comedy and straight plays. It was most famously known as the home of Peter Richardson’s Comic Strip which launched the careers of many household names such as Adrian Edmondson, Dawn French, Jennifer Saunders, Rik Mayall and Alexei Sayle in the 1980s.