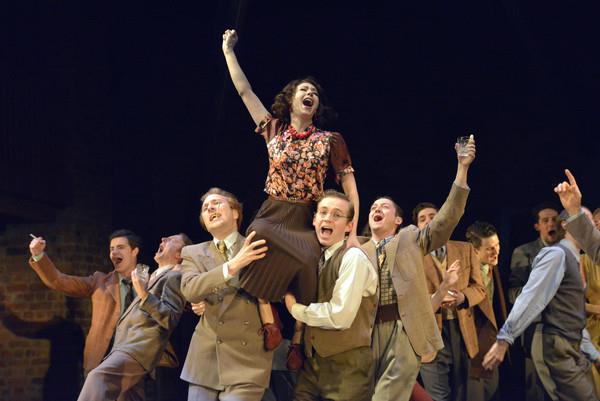 The RSC announced today that Tom Morton-Smithâs new play Oppenheimer will transfer into the Vaudeville Theatre in Londonâs West End in March for a limited run of eight weeks.

The show transfers into the NIMAX Vaudeville Theatre directly after its acclaimed run in the Swan Theatre, Stratford-upon-Avon and will retain most of the original cast, led by John Heffernan in the title role. The production will begin previews from 27 March, with a press performance on 31st March.

Commissioned by the RSC, Morton-Smithâs epic and thrilling new play tells the story of âthe father of the atomic bombâ J.Robert Oppenheimer, taking us into the heart of the Manhattan Project and revealing the personal cost of making history.

RSC Artistic Director, Gregory Doran, said; âI am so pleased that Tomâs wonderful play can be seen by London audiences. The epic nature of the subject and the broad sweep of the narrative is something we have always encouraged in our commissioned new work. This is a direct legacy of Shakespeare, who, of course, was once a ânew writerâ himself. Angus Jacksonâs original production opened in the Swan Theatre which is not only a showcase for Shakespeareâs contemporaries, but also for todayâs writers who have been inspired by him. Tom took up our challenge to think big, and has tackled a complex subject and some extraordinary personalities, and has woven a compelling narrative around them.â

This production will be joined in London by the transferred RSC production of A Mad World My Masters which, after an ETT UK tour, plays at the Barbican from 29 April â 9 May, and the Companyâs long running Matilda The Musical at the Cambridge theatre.

Nimax Chief Executive Nica Burns said âHaving sat transfixed at the Swan, I am delighted that the Vaudeville season will give this utterly gripping new play a further life and new audiences the opportunity to see it. Epic theatre on an intimate scaleâ.

Oppenheimer is designed by Robert Innes Hopkins. The lighting is designed by Paul Anderson with music by Grant Olding. Sound is by Christopher Shutt and choreography is by Scott Ambler.