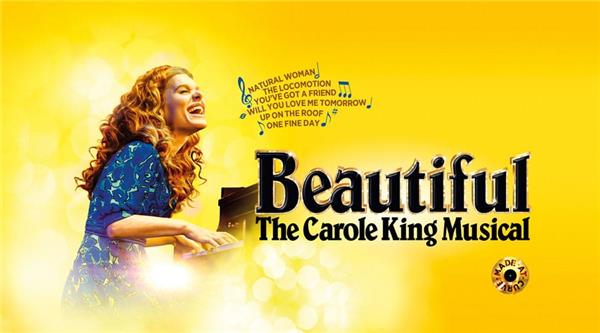 Beautiful – The Carole King Musical, will be back on-stage from February 2022 in a new production of the popular show, which previously enjoyed a two-and-a-half-year West End run.

The show, which features Carole King classics, including the title track Beautiful, tells the true story of Carole King as she rocketed to stardom as one of the most successful solo pop musicians of all time.

Told through her own music, this biographical jukebox musical gained a loyal following of fans during its original West End run, and subsequent tours. So it’s no surprise that producers have been keen to bring the show back for a new touring production next year.

The tour will open at Curve in Leicester on 28th February 2022, before moving south to the Theatre Royal Bath (17th – 26th March) and the Mayflower Theatre Southampton (12th – 16th April). More dates are yet to be announced.

This new production of the modern classic musical will be directed by Nikolai Foster, Artistic Director at Curve in Leicester.

Foster will be joined by a creative team featuring Curve talent, such as Ben Cracknell on lighting design, and Kay Magson responsible for casting. Choreography will be by Leah Hill, set design by Frankie Bradshaw, and costume design by Edd Lindley Tom Marshall is the production’s sound designer.

In a joint statement with Curve’s CEO, Chris Stafford, Nikolai Foster says: “We are thrilled to be working on this new production of Beautiful, bringing this remarkable story and music to life with the finest actor-musicians working in the UK today. We are honoured to be collaborating with orchestrators, Grammy Award-winner Steve Sidwell and Tony Award-winner Sarah Travis, to bring King’s incredible tapestry of songs to life. We are also proud to be working alongside out partners at Theatre Royal Bath and Southampton’s Mayflower Theatre.”