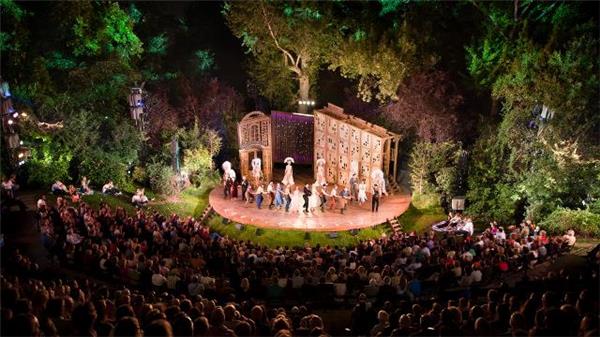 The Regent’s Park Open Air Theatre has launched its 2022 season programme. The three headline productions for 2022 will be Legally Blonde: The Musical, the world premiere of 101 Dalmatians, and an updated production of Antigone.

Legally Blonde will open the season, directed by Lucy Moss, one half of the writing duo behind the smash hit musical Six. The original London production of Legally Blonde, at the Savoy Theatre, launched Sheridan Smith into the limelight and it’s been almost a decade since London last saw Elle Woods get into Harvard Law School, and this brand-new production is sure to be a sell-out hit.

The new production of Legally Blonde will run from 13 May to 2 July.

Following a very pink few weeks, the Regent’s Park Open Air Theatre is turning monochrome for the world premiere of the new musical adaption of 101 Dalmatians. Based on the 1996 Disney animation, which was also recently re-released as a live action film, this new version features music and lyrics by Douglas Hodge, and will be directed by Timothy Sheader.

The official opening night is 22 July. Previews start on 12 July and the run ends on 28 August.

To round up a fantastic platinum anniversary season, the Regent’s Park Open Air Theatre turns to something a little more traditional.

They have commissioned a new adaptation of Sophocles’ classic play Antigone. Written by Inua Ellams (Barber Shop Chronicles), the play tells the story of a young girl, Antigone, who flees her home after burying her brother against her uncle’s wishes.

Antigone opens with previews on 2 September. Opening night is on 9 September and the run ends on 24 September.