Catch Half a Sixpence on TV this Christmas 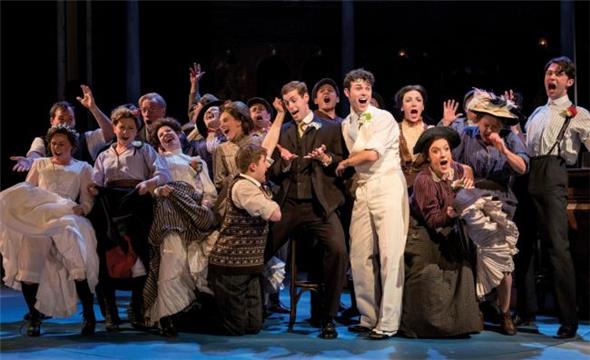 The smash-hit production of Half a Sixpence, which launched Charlie Stemp into the spotlight in 2016, is back for one night only this Christmas.

The award-winning production, which starred Charlie Stemp as Arthur Kipps and Emma Williams as Helen Walsingham, was recorded and will be broadcast on Sky Arts, under the revised title of “Kipps” – due to licencing requirements.

The show, which features top songs such as “Flash, Bang, Wallop” and “Half a Sixpence” tells the rags-to-riches story of Arthur Kipps, an orphan who, through some surprise twist of fortune, inherits a fortune.

The stage musical is based on HG Wells’ semi-autobiographical book, “Kipps: The Story of a Simple Soul”. The show features a book by Julian Fellowes, paired with the fantastic musical theatre double-act that is George Stiles and Anthony Drewe.

The festive broadcast of the 2016 production gives us another chance to admire Andrew Wright’s incredible choreography, for which he was the WhatsOnStage Best Choreography Award. We can’t wait to relive the fast-paced excitement of “Flash, Bang, Wallop”!

The recording will be broadcast on Freeview Channel 11 (Sky Arts) on Wednesday 29 December at 6:30pm.

If you want to catch Charlie Stemp live on stage over the holiday season, get yourself tickets for Mary Poppins at the Prince Edward Theatre, where Charlie is starring as everyone’s favourite chimney sweep, Bert.

Bert is another high energy singing and dancing character for Charlie Stemp, who was nominated for an Olivier award for his portrayal of the role.

The stage adaptation of Mary Poppins – like Half a Sixpence – has received the Stiles and Drewe treatment, with additional music and lyrics building on the original Sherman Brothers’ score. The show is a true family favourite, and perfect for a Christmas or New Year treat.