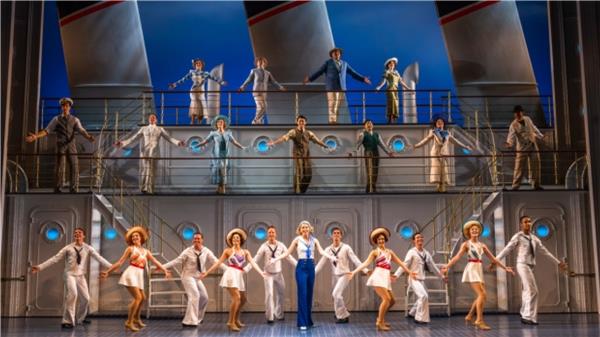 No question about it: this remains the best show in town. One of my abiding memories of last summer was seeing the audience give a standing ovation after the captivating dance number at the end of the first act. Were we all a little dizzy with the excitement of actually being in a theatre?

Well, perhaps we were, but a second visit to Kathleen Marshall’s revival of the vintage Cole Porter musical — now back in residence at the Barbican — confirms that it was no trick of the light. First staged at the height of the Great Depression, Anything Goes delivers an intoxicating cocktail of irreverent, sexy humour and insouciant melody. If there’s one production I’d prescribe to a person who is allergic to musicals, this would be it. Cabaret, playing across town, may have more intellectual cachet (how intriguing that it depicts much the same era, but from a very different vantage point), yet for sheer energy and musical flair, Porter wins by several lengths.

The changes in the cast haven’t had any ill effects. We all raved about the Broadway star Sutton Foster last year, yet our own Kerry Ellis is every bit as seductive as Reno Sweeney, the cheerfully cynical chanteuse who gets entangled in romantic intrigue on an ocean liner (handsomely evoked by the set designer Derek McLane). Ellis’s face has a touch of Jean Harlow about it, and she handles Marshall’s choreography as niftily as any Busby Berkeley babe.

While Denis Lawson may not be quite as animated as Robert Lindsay, he still brings low-key charm to the role of gangster Moonface Martin. Bonnie Langford is the spry gold-digger Evangeline Harcourt, while Simon Callow charms us as the boozy tycoon Elisha Whitney.

Of the original cast members, Carly Mercedes Dyer still steals scenes as Moonface’s fast-talking moll, and Haydn Oakley twinkles as a toff addicted to the latest in American slang. Jon Morrell’s costumes are every bit as elegant as the one-liners.

Modern-day audiences may not get every topical reference — Jimmy Durante, yes, Jimmy Walker, probably not — but the melodies are timeless, and the hint of Duke Ellington in the arrangement of Blow, Gabriel, Blow provides a bonus. I actually underestimated the show last time: I thought there was a very slight falling off in the second half. True, it doesn’t have as many classic tunes, but the tangled comedy of manners keeps bouncing along to the very end. An unmissable evening, in short.