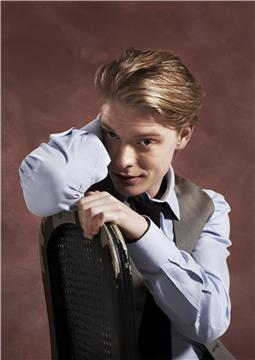 Kenneth Branagh Theatre Company today announced that Freddie Fox will be joining the company of Romeo and Juliet, sharing the role of Romeo with Richard Madden. This is to allow Richard Madden sufficient time for his injured ankle to continue to heal and because his doctors have prescribed rest between performances.

Freddie Fox will join the company following a period of intensive 26 Julyfrom Tuesday Freddie. last 48 hoursrehearsals with Lily James and the rest of the company over the eatre work recently played the role of Romeo at Sheffield Crucible Theatre.

Richard Madden injured his ankle whilst running and has been receiving physiotherapy since. Due to the nature of the injury it has taken some time to heal and it continues to require both rest and physiotherapy. Since the injury happened, the part of Romeo has been covered by Tom Hanson, who has played Paris in the production in addition to understudying Romeo. In an unfortunate set of circumstances, Tom has also injured his leg and is unable to perform, which has prompted the producers to bring Freddie Fox into the company.

Kenneth Branagh said: âSometimes things do not go according to plan in the theatre. Who would have predicted that both Richard and Tom would sustain such unexpected injuries during the same run of this play? Our job is to help make sure that they both make the best recovery possible, whilst working as hard as we can to provide a great show for audiences, which is why I could not be more thrilled to welcome Freddie Fox into the company. An old friend of many of the cast, Freddie is a talented and exciting actor who will no doubt bring much to the role of Romeo. As Richardâs ankle improves and he is able to play more performances we look forward to completing the run with both of these wonderful artists.â

Richard Madden said: âIt has been hugely frustrating and sad that I have not been able to perform in the show, but my ankle is getting better and I will be returning soon. I wanted to say a big thank you to Tom for covering me so brilliantly and I hope that he too recovers from his injury soon. I also wanted to say a massive thanks to Freddie for stepping in to help, I know that he is going to be fantastic.â

Freddie Fox said: âI am really pleased to be joining Lily, Derek, Meera and the company. I look forward to continuing the exciting work that Richard and Tom have created in this wonderful production, and to bringing my own experience and passion for the role of Romeo.â