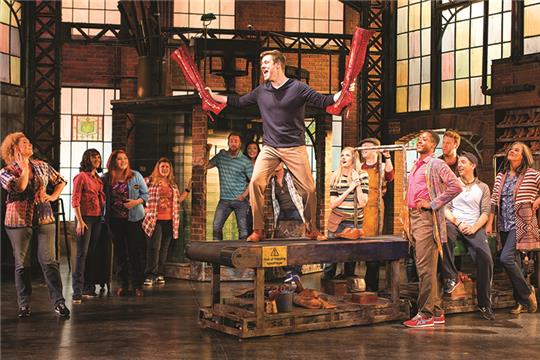 British actor-singer David Hunter previously inherited the leading role of Guy in London in the Tony-winning musical Once and has now stepped into the co-starring role of Charlie Price in the Tony and Olivier Award-winning Kinky Boots, opposite Matt Henry at the Adelphi Theatre. A veteran of such other London shows as One Man, Two Guvnors and Seussical, the charming Turner took time early one recent evening to talk West End takeovers, tricky accents and his new baby boy.

Do you feel like the go-to guy for musical takeovers?

Yes, possibly. Maybe I'll go on to take over the worldâthere are a few things I would put right.

Does taking over Charlie Price in Kinky Boots feel different from stepping up to play the onstage musician, Guy, in Once?

It couldn't be more different, though strangely the two characters match up well in that they both bring a sort of real grounded energy into the show. Guy in Once spends a lot of time running after Girl and trying to keep up, and it's much the same in Kinky Boots, where Charlie brings a grounded energy into the unbelievably exciting and flamboyant world of Lola [the drag queen played by Olivier Award-winner Matt Henry.

What was it like joining these two productions under such different circumstances?

With Once, I started as a standby so got to know the cast very well and I was actually the one who was responsible for making sure that [the new Girl] Jill Winternitz blended in nicely because I had been with the show six months already by the time Jill arrived. On Kinky Boots, I was the new one coming in, which was an incredibly daunting task, to be honest. The relationship between Matt [Henry] and his onstage Charlie is so key and it has to work, so there had to be time to allow that relationship to grow and to respond. It must have been a huge challenge for Matt to have a completely different Charlie.

How did you and Matt find that rapport?

We went out to lunch before we started rehearsal and then would hang out in one another's dressing rooms and say hello, but it's really been in our stage time together that you find your way through it. What's interesting is that Charlie in the show is discovering Lola for the very first time, and so to do that as an actor as well as a character is very exciting. I think it would be very different for a new Lola coming in opposite a Charlie who had been there for a long time.

Were you advised to come and watch the production, in part to clock the choices of London's original Charlie, Killian Donnelly?

We were told relatively firmly not to watch the show, which is really music to your ears as an actor when the director encourages you to create your own process so that you can be different to any other Charlie. I had seen the show just once some six or eight months before and watched it completely open-mindedly, not knowing I might one day be in it. Then once I got the part, I didn't watch [the production] again: audiences are coming in to meet me and I am their Charlie. That is how it works and how I think it should be.

What's it been like to sing the first stage musical from pop music diva Cyndi Lauper?

Well, I had listened to the cast recording and loved it. What's great now that I have been doing [the musical] since the middle of August is how brilliant the numbers are to sing: they're absolutely joyous and exciting and so electric that you can't help but be swept along by them.

Have you met her?

We haven't seen Cyndi yet but we did have Mr. Mitchell [Jerry Mitchell, the director-choreographer] pop by and he was fantastic. He came in to sprinkle some magic over us all, and the minute you see him, you can see why he is so successful. He directs with such vigor and excitement and drive that he just changes the mood in the room.

Has your involvement in a piece so obsessed with shoes affected your own footwear?

I'm looking a lot smarter these days. I've recently bought two or three new pairs of shoes, which is more than I've bought in the last few years!

Was it tricky to get used to the movement, some of which is pretty demanding?

I've found that I really have to be absolutely fit and healthy because by the time I put the boots on in the show, it is party time, and you have got to join in! For me, this has been like going to the gym every day, which I have never done in my life. The first time you go on to those [onstage] travelators, your grown-up brain says, "this is really a bad idea" but somehow you get through it.

Do you feel a connection to Northampton, the town in the English Midlands where Kinky Boots takes place?

What's been fascinating is that my family is from an old mill town in Lancashire [in the north of England] called Burnley, which is steeped in the same sort of tradition as Northampton is with shoes. The thing with Burnley is that the mills have all closed down, so it's town rediscovering what it needs to be after the main industry is gone, so that kind of connection to a community all makes sense to me. Accent-wise, the Northampton accent is probably the trickiest I have ever had to do: it's not one thing or another, but you've still got to get it right.

Does the positive energy of the show spill over into your own life?

Oh, yes! We have a baby boy called Rufus at home who is four months old, so I might have been up really early or standing around the house bouncing a baby all day long, but whatever happens, the show makes me feel brilliant. Every time I leave the theater to go home, I feel fantastic. I have never been in a production where every night you are guaranteed an on-your-feet standing ovation from the audience, who are whooping and cheering. Doing this is a lovely tonic to whatever life throws at you.

What is it like being a new father while performing a musical that also has a lot to say about fathers and sons?

What's amazing is how much has changed since I did Once. We got married and my wife got pregnant and had a baby and then before we even knew it, I had started a new show, so I'm a very different man now than I was when I was last in the West End. And for me to be in a musical that has so much to say about family just reinforces how much I am in love with my son.

Do you sing Rufus the Kinky Boots score?

I sing to him constantly but he's too young to realize he is getting West End-standard entertainment every day of his life! I must say that Rufus has yet to give me a standing ovation, but if he wants to give [wife] Tara and me a sleeping ovation, that will do just fine!

Were you tempted to name him Charlie when he was born?

No, and I couldn't have called him Guy either: that might be a step too far!