Celebrate This Christmastime With White Christmas In The West End 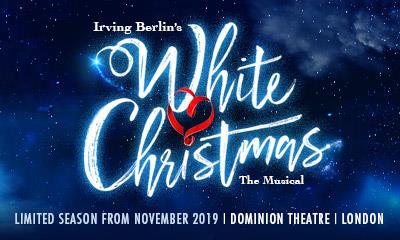 White Christmas is returning to the West End from the Leicester Curve to make this festive season more special.  Irving Berlin’s phenomenal musical, with book by David Ives and Paul Blake, is going to delight everyone, regardless of the age, at London’s Dominion Theatre on 15 November.

Based on the 1954 super hit romantic comedy film, the story portrays Bob Wallace originally played by Bing Crosby and Phil Davis originally played by Danny Kaye, two singers  who served in military during World War Two and now leading separate lives post war. After learning, their ex-commander, General Waverly, is in financial crisis, they collaborate with two singing sisters Betty and Judy Haynes to help their Ex-commander. They plan to perform in his about to- be- shut down inn by creating a Christmas stage show in Vermont, USA. The success of this stage show is absolutely indispensable because General Waverly’s fate is entwined with it. The music of the show is extremely spell-binding and singers’ flawless performances make White Christmas unquestionably glorious. The show features songs like ‘Blue skies’, ‘Count Your Blessings’, ‘Sisters’, and, ‘White Christmas’ an ever green and all-time favourite song.

The creative team of White Christmas has Nikolai Foster as director, Stephen Myer as choreographer, Irving Berlin as musician and lyricist, Diego Pitarch as costume designer and Tom Marshall as sound designer. Their professional competence makes the show truly stunning.

The opening night of the mesmerising musical is on 15 November and the final performance is on 04 January 2020.  Don’t forget to miss this 2 hours 20 minutes long Christmas treat.