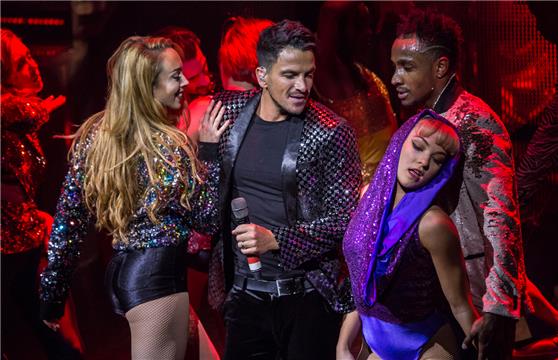 A year after he stopped the show with a mid-song standing ovation at Thriller Live’s 4,000th West End performance, producers today announce that award-winning Peter Andre is to guest star in Thriller Live for a strictly limited two-weekseason in December.

Peter will headline at the Lyric Theatre from 10 - 22 December (except Sunday evenings) as the first in a series of guest stars and surprises in the show’s final six months at the Lyric, where it is ending its record-breaking 11-year run in April, 2020 to allow the theatre to be refurbished. Plans are in hand to transfer Thriller Live to another West End theatre and a second production will start a 12-month world tour, opening in Lausanne Switzerland on 27 December 2019.

Peter Andre is today a global megastar with almost 6 million social media followers. When he first burst to international fame as a pop artist in the Nineties with hits including ‘Mysterious Girl’ and ‘Flava’, he was the sixth highest selling artist in the UK, having had numerous number one hit singles, two number one albums, and collected a multitude of national and international awards.

Peter said: “I had such an amazing experience performing in Thriller Live’s 4,000th gala night and I can’t wait to come back for a full run of shows. This is such an honour for me because Michael Jackson was musically the biggest influence in my life and career. He made me dream of being on stage and to be part of music. A year ago in Thriller LIve I sang ‘Rock With You’ - which was one of the first records I ever bought - ‘I Just Can’t Stop Loving You’, ‘Man in the Mirror’ and ‘She’s Out of My Life’. I can’t wait to spring a few more surprises!”

Gary Lloyd, Thriller Live’s award-winning Director/Choreographer said: “After working with Peter Andre on his own live stage and arena shows, I discovered how passionate he is about Michael’s music. Peter absolutely wowed us all last year when he appeared as our special guest to help celebrate our 4,000th performance. I am delighted we get the opportunity to explore his incredible talent and affinity for this material even further with the announcement of these dates.”

Thriller Live Producers Paul Walden and Derek Nicol of Flying Music said: “We recently announced that due to the theatre’s refurbishment, Thriller Live will sadly end its record-breaking 11-year run at the Lyric on Sunday 26 April 2020, at which point the show will have completed 4,705 performances making it the longest running show ever at the Lyric and the 11th longest running musical in West End history. We promised special guests and surprises to end our run there on an absolute high and we are delighted to welcome Peter Andre back to headline two weeks of shows. This promises to be an unforgettable experience for fans lucky enough to get a ticket.”

Peter Andre is an award-winning global media star with a successful music and television career. In the 1990s he was the sixth highest-selling artist in the UK, with numerous number one hit singles, two number one albums and toured all over the world collecting a multitude of national and international awards.

With many TV shows and appearances under his belt, including his reality show ‘Peter Andre: My Life’ and ‘60 Minute Makeover’, the third series of ‘I’m a Celebrity...Get Me Out of Here!’, and the 13th series of ‘Strictly Come Dancing’, in which he was partnered with Janette Manrara. Peter has also moved into the world of film. He has sold out arenas, recently completed his ‘Celebrating 25 Years’ tour and appeared on tour as Teen Angel in ‘Grease: the Musical’.

As well as many more amazing projects, the happily married father of four is busier than ever.