Do not miss the chance of involuntary giggles; do not miss The Book Of Mormon 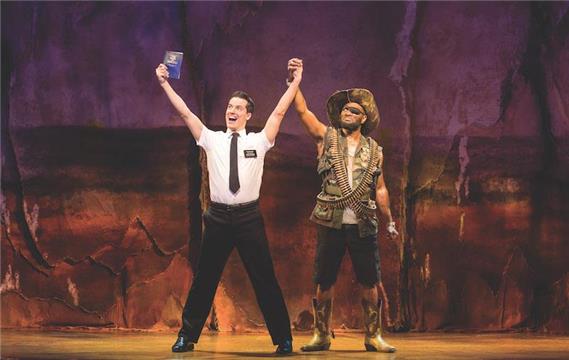 Trey Park and Matt Stone created another masterpiece, The Book Of Mormon, after making the famous animated comedy, South Park. A nine time Tony Award winner show which is now celebrating  over six years in the West End. The crazy and hilarious musical is an out and out comedy and a light entertainment.

The Book Of Mormon is about two young latter day missionaries who are on a mission to preach the religion of the church of Jesus Christ of Latter day saints to the people living in a remote village of Uganda. Determined to complete their mission the two enthusiastic young men face the challenge of lack of interest by the inhabitants who are more concerned about the real issues in their lives like oppression, village war loads, female gentile mutilation, famine and AIDS.

The Book Of Mormon was premiered in the West End on 25 February 2013 at the Prince Of Wales Theatre. The musical was voted as Funniest West End Show in March 2014 as part of the 2014 West End Frame Awards. Before that The Book Of Mormon was an instant Box Office hit  when it was originally played at the Eugene O’Neil Theatre in New York and bagged nine Tony Awards from fourteen nominations including, Best New Musical, Best Original Score, Best Direction of a Musical and Best Book of a Musical.

The musical has outstanding, melodious and funny songs like” Tomorrow is a latter day”, “Hello”, “I am Africa”, “Two By Two”, ”Turn It Off”, “Baptize Me”, “Joseph Smith American Moses”, “All American Prophet”, “ Spooky Mormon Hell Dream” and “I Believe”.

The cast of this witty show consists of Dom Simpson as Elder Price, Tom Xander as Elder Cunningham, Richard Lloyd King as Mafala Hatimbi, and many other brilliant artists. The Book Of Mormon has a book, music and lyrics by the geniuses like Matt Stone, Trey Parker (Creators of South Park) and Robert Lopez (Famous for co creating Avenue Q). The musical is choreographed by Casey Nicholaw who is also the co-director of the show with director Trey Parker. Lighting design is by Brian MacDevitt, sound is by Brian Ronan and costume is by Ann Roth.

789
The Book Of Mormon Prince of Wales Theatre Book Tickets