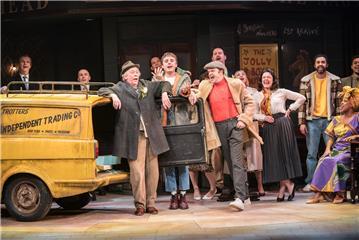 It has been announced that Only Fools and Horses The Musical continues running at the Theatre Royal Haymarket. With book, lyrics and music by  Paul Whitehouse and  Jim Sullivan (Additional music by Late John Sullivan and Chas Hodges), Only fools And Horses is based on 1981 BBC’s iconic comedy show and was voted Britain’s most popular sitcom in a 2003 BBC poll. The theatre adaptation of the show is co-written by John Sullivan’s son Jim Sullivan and Paul Whitehouse.

Only Fools and Horses The Musical is about Del Boy Trotter, an aspiring market trader who lives in Peckham and always scheming to get rich. The other characters are equally adorable and funny, Rodney who is making preparations to get married with Cassandra and granddad contemplating about his life. Only Fools and Horses is a classic Comedy which entertains the audience in a gleeful manner.

Caroline Jay Ranger is the director and choreographer of the musical while Liz Ascroft is the costume and set designer, David Grindrod has done the casting, Stuart Morley has given musical supervision and arrangement, lighting is by Richard G Jones and sound is by Rory Madden.

Only Fools And Horses cast includes Tom Bennett as Del Boy Trotter, Ray Hutton as Rodney and Paul Whitehouse as granddad. Whitehouse stated: "After a bit of a break from the show I was itching to return to the stage and it's a great feeling to be back in Grandad's armchair. After almost a year we're still playing to packed houses throughout the week at the Theatre Royal Haymarket!"