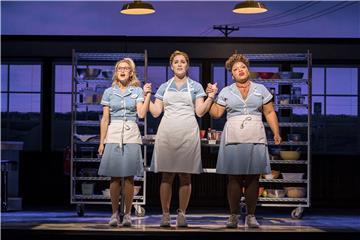 Sara Bareilles and Gavin Creel will perform the lead roles for two more weeks in Waitress at the West End’s Adelphi Theatre. Sara Bareilles who is also the composer and lyricist of Waitress Musical and a Grammy Award Winner, made her debut as a role of Jenna in Waitress at the West End in January 2020 alongside Gavin Creel, an Olivier Award Winner, playing the role of Dr Pomatter.

Sara Bareilles got acclaimed for her hit songs like ‘Brave’, ‘Love Song’ and ‘She used to be Mine’ also performed as Mary Magdalene in Jesus Christ Superstar Live In Concert other than playing the role of Jenna. Gavin Creel, on the other hand, won an Olivier Award for his performance as the role of Elder Price in The Book of Mormon.

The story of the Waitress revolves around the struggles of Jenna Hunterson, a small town waitress and pie expert, who is in a toxic relationship and wants to have a better life for her and her upcoming baby, and also in love with her gynaecologist, Dr Pomatter. Thus, she takes part in a baking contest inquest of winning the cash prize and bringing some improvement in her life. The musical is based on on a 2007 film of the same name by Adrienne Shelly and features original score by Grammy Award-nominated artist Sara Bareilles, with songs like “The Negative” and “She Used To Be Mine”. Waitress is directed by Tony Award-winner Diane Paulus and has a book by Jessie Nelson.

Sara Bareilles and Gavin Creel will extend their performance in Waitress till 21 March 2020 in the West End’s Adelphi Theatre.