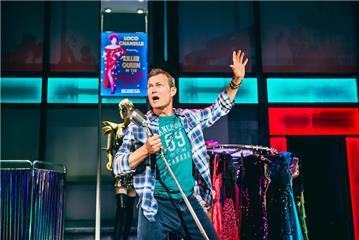 Katy Brand got acclaimed as an actor and a writer who wrote her own sketch show Katy Brand’s Big Ass Show. She also wrote News Quiz and Peep Show also 3Women, a play which ran at the Trafalgar Studios in 2019. In addition to that, she acted in the Big Bang, Nanny McPhee including Peep Show and Grandpa’s Great Escape. Katy Brand will play the role of Jamie’s schoolteacher Miss Hedge in the musical and she said about her role, “If I could tell my teenage self that I would one day have the chance to perform in a huge hit show on the West End stage, that girl would pinch herself.  Jamie gets to realise his dream every night, and now so do I!”

Rufus Hound is famous in the West End because of his performances in Wind in the Willows, One Man Two Guvnors and Dirty Rotten Scoundrels. Hound also worked in Don Quixote by RSC at the Garrick Theatre. His face is quite familiar to the audience due to his screen work in Doctor Who, Trollied, and seven series of ITV panel show Celebrity Juice. Hound will play as Hugo/Loco Chanelle and said, “I am absolutely thrilled and have been waxing for the last year in anticipation and am currently so tucked I may as well be a Ken doll. Bring. It. On.”

Katty Brand will join the cast of Everybody’s Talking About Jamie from 3rd March to 20th June and Rufus Hound will be playing in the musical from 16th March to 30th May.