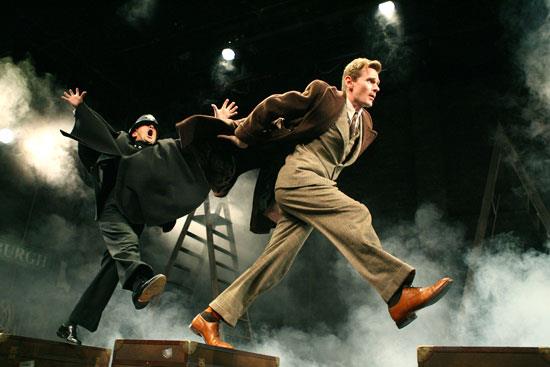 On Saturday 5th September 2015 The 39 Steps will close after 9 years at the Criterion Theatre.

The Olivier, Tony and Whatsonstage award-winning comedy has celebrated 9 years in the West End since it opened at the Criterion Theatre in 2006.

By the 5th September, The 39 Steps will have played the 5th highest number of performances of any play in West End history. Over the past 9 years, the production has seen more than 50 actors tread its boards and between them they have got through over 3,000 pairs of stockings, 530 O/S maps of Scotland, 38 pairs of handcuffs and 16 suspender belts.

With the production having performed in 39 countries including Moscow, Shanghai, Tokyo and Paris, an audience of 3 million have seen the production worldwide. There is still time to take advantage of our fantastic savings of 49% on price band A tickets and see this fantastic show before it closes its curtains for the last time.