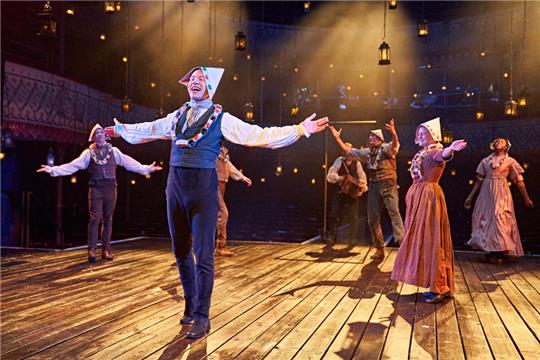 A Christmas Carol which is an adapted version of Charles Dickens' 1843 novella of the same name, by English screenwriter and playwright Jack Thorne is coming back to Old Vic for a fourth consecutive year this Christmas. The schedule of the musical is to come back to fascinate the spectators from 21 November 2020 to onwards.

Charles Dickens' celebrated adaptation was first premiered at the Old Vic in 2017 in which Rhys Ifans played the role of Ebenezer Scrooge, originally. The musical has been running on every Christmas at the Old Vic from then on while the production made its Broadway debut last year at the Lyceum Theatre.

A Christmas Carol is directed by Matthew Warchus, set and costume design by Rob Howell, lighting design by Hugh Vanstone, sound design by Simon Baker and casting by Jessica Ronane CDG. The show features the music by Christopher Nightingale and the story of this classic by Charles Dickens is about Ebenezer Scrooge who is a Victorian businessman and an awful miser who isn’t ready to spend even on the eve of Christmas and is confronted by the ghosts of previous Christmases as well as the ghosts of present and future Christmases including the ghost of his deceased business partner, Jacob Marley. The musical is all set to run at the Old Vic on 21 November and throughout the festive season of Christmas till 16th January 2021.

Mark Shenton, a British arts journalist and theatre critic, reviewed A Christmas Carol in these words:

“Rob Howell's atmospheric set - with suspended lanterns hanging over the entire auditorium contributes its own delicate magic to a Christmas treat that's perfect for the entire family.”

A Christmas Carol will start its run at the Old Vic on 21 November till 16 January 2021.