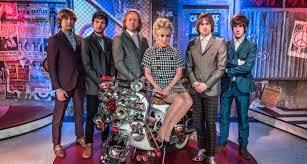 "We are delighted to announce a very special one-off online event at 7pm BST on Friday April 24 to raise funds for our heroes in the NHS, battling to keep us all safe and healthy on the frontline on a daily basis. We really can't thank them enough but this is our way of trying."

"For the first time ever, All or Nothing, as performed to thousands in London's Swinging West End, will be screened in its entirety via YouTube for everyone who came to see us all over the UK – and of course those of you who missed us last time around.

"The footage was taken during our second West End run at London's prestigious Ambassadors Theatre and we would be delighted to re-live this unforgettable experience with you in 'real time'."

All or Nothing is the story about four charming boys from East London. In 1965, they formed a band and experienced the rise and fall of fate. The music and lyrics of All or nothing is by the Small Faces and written, directed and produced by Carol Harrison. The Mod musical has some evergreen numbers like "All or Nothing", "Itchycoo Park", "Lazy Sunday", "Tin Soldier" and "Whatcha Gonna Do About It".