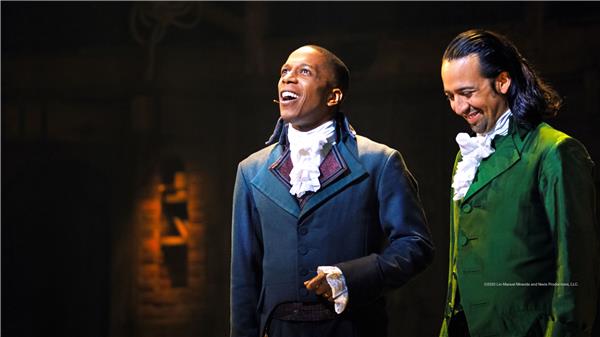 Hamilton musical which has Lin-Manuel Miranda in a lead role as Alexander Hamilton will be streamed on Disney+ from 3rd July 2020. In his tweet Miranda said:

"Never been so happy/nervous in my life. We all watching this together on July 3, yeah?"

Directed by Thomas Kail the film features original cast of Broadway and off course Lin-Manuel Miranda in lead role. The film has been shot at the Richard Rodgers Theatre on Broadway in June 2016 and earlier it was decided to be released in the US and Canada on 15th October 2021 which has now changed and the new date of its release is on 3rd July 2020.

According to press release statement of Hamilton:

The production ‘transports its audience into the world of the Broadway show in a uniquely intimate way’ by ‘combining the best elements of live theater and film, the result is a cinematic stage performance that is a wholly new way to experience Hamilton’.

When the film was announced Lin-Manuel Miranda stated:

“I fell in love with musical storytelling growing up with the legendary Howard Ashman-Alan Menken Disney collaborations – The Little Mermaid, Beauty and The Beast, Aladdin.

“I’m so proud of what Tommy Kail has been able to capture in this filmed version of Hamilton – a live theatrical experience that feels just as immediate in your local movie theatre. We’re excited to partner with Disney to bring the original Broadway Company of Hamilton to the largest audience possible.”

The West End production starring Jamael Westman was opened at the Victoria Palace Theatre in London in December 2017 after the musical gained a lot of success and acclaim in Broadway.