Pride and Prejudice* (*Sort Of) starts previews in the West End 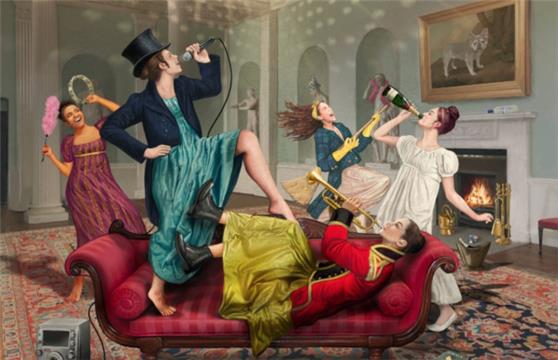 The new production of Pride and Prejudice* (*Sort Of) starts previews at The Criterion Theatre on 15 October.

Five vaguely familiar young women have a story to tell. You'll have seen them, emptying the chamber pots and sweeping ash from the grate, the overlooked and the undervalued making sure that everyone above stairs finds their happy ending. Because when you can't be the romantic lead in your own story, you have to play a supporting role in someone else's.

Men, money and microphones will be fought over in this irreverent, all-female adaptation of Jane Austen's unrivalled literary classic. It's party time for Elizabeth, Darcy, Jane, Bingley and even those who never got names... Let the ruthless match-making begin.

The musical includes pop favorites such as "Every Day I Write the Book," "Young Hearts Run Free," "Will You Love Me Tomorrow," "I Got You Babe," and "You’re So Vain." The all-female cast of five play every character and also sing and play instruments.

Producer David Pugh said, “I so wanted to bring Pride & Prejudice* (*Sort Of) to London’s glittering West End. I wanted to put it into the perfect theatre, which is the Criterion, and I would only open it as one of the first new shows in London where every seat could be filled.”

The cast will include writer and director McArthur (Wendy and Peter Pan) as Darcy and Mrs. Bennet, Tori Burgess (Alice's Adventures in Wonderland) as Mr. Collins, Christina Gordon (Glory on Earth) as Lady Catherine de Bourgh and Jane, Hannah Jarrett-Scott (Glory on Earth) as Charlotte and Charles Bingley, and Meghan Tyler (A Streetcar Named Desire) as Lizzie Bennet.