Back to the Future: Star Misses Opening Night Due to Covid 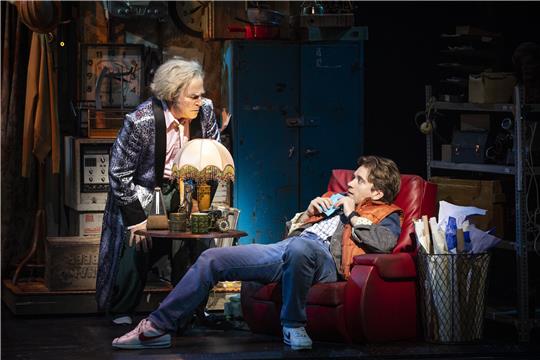 Back to the Future: The Musical has opened to feverish excitement at the Adelphi Theatre, after seven years in the pipeline.

However, time-travel is a dangerous thing, and leading man, Roger Bart, was forced to miss Monday’s opening night performance, as he’s tested positive for Covid and is self-isolating to avoid the risk of taking Covid back to 1985.

Bart, who stars as Doc Brown in the hotly anticipated musical remake of the classic film, will return to the boards of the Adelphi Theatre in a couple of weeks.

The opening night performance was handled magnificently by understudy Mark Oxtoby, with the rest of the cast all in fine form and raring to go.

In an exciting tie in with the original film, Christopher Lloyd – who played Doc Brown in the movie – was in the audience at the Adelphi Theatre for the opening night performance.

Michael J Fox – the original Marty McFly – watched a recorded version of the show from America and was ecstatic with excitement. It’s a “freaking great” show, if you ask him!

This jukebox musical will have you knee-tapping throughout with old-school classics including The Power of Love, Earth Angel and Johnny B. Goode.

Back to the Future: The Musical, was due to transfer to the West End following its world premiere in Manchester back in March 2020. We all know what happened next, so it’s been a good 18 months in the offing, and we’re so excited to have this buzzing new show in town.

For an extra special experience, see if you can nab tickets for the 21st October performance – it’s the official “Back to the Future Day” and we’ve just a small hunch they might want to celebrate the occasion in some way or another.

The show is currently booking until spring 2022. Don’t wait though, you don’t want time to run out on you…

45
Back To The Future Adelphi Theatre Book Tickets