THE MOUSETRAP FACTS AND FIGURES 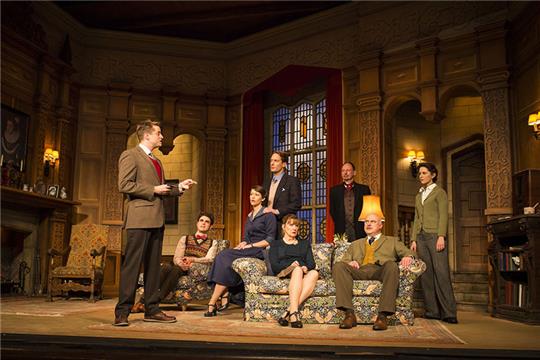 Agatha Christie’s The Mousetrap is unique. It sets a new world record every day for the number of performances. The 26,500th performance took place on Saturday 26th May 2016. For over 57 years The Mousetrap has been the world’s longest running stage production. On 25th November 2012, The Mousetrap celebrated its Diamond Anniversary – 60 Years.

When The Mousetrap opened on 25th November 1952, with Richard Attenborough and his fellow film star and beloved wife Sheila Sim in the leading roles, it was only seven years since Hitler died. Much essential food was still rationed, Mr Winston Churchill was Prime Minister, Harry Truman was President of the United States, and Stalin was ruler of Russia. There was fighting in Korea, and Princess Elizabeth began her long reign as Queen. The last tram ran in London, television programmes ended at 10.30 p.m., and the entire TV listings only occupied three and a half lines.

Since The Mousetrap opened 450 actors and actresses have appeared in the play, there have been 260 understudies. The play has been presented in 27 different languages in more than 50 countries. Having achieved many world records at The Ambassadors Theatre, where it opened, it moved to the St. Martin’s Theatre in March 1974 without missing a performance, and in its new home it has achieved many more world records. Only the clock on the mantelpiece has survived onstage and the original wind machine is still in use to this day. Everything else has been replaced.

The Mousetrap is proud of the sign that hangs above the Box Office: “The Mousetrap offers no discounts of any kind”. The Mousetrap became the world’s longest running production on 12 April 1958, exceeding the run of “Chu-Chin-Chow”, on its 2,239th performance. The late Deryck Guyler has been a part of The Mousetrap since its first London performance. Guyler, who died in 1999, provided the pre-recorded voice of the newsreader in the first Act.

On 25th November 2002, The Mousetrap celebrated its golden jubilee with a 50th Birthday Gala Performance attended by Her Majesty Queen Elizabeth II and His Royal Highness The Duke of Edinburgh, together with a throng of former cast members.

Lord and Lady Attenborough remained closely involved with The Mousetrap through his Trusteeship of Mousetrap Theatre Projects, a charity which takes thousands of young people to West End theatres each year (only rarely to The Mousetrap itself) who would otherwise be unable to attend.

To mark its 60th anniversary in 2012, a Gala Performance was held in support of Mousetrap Theatre Projects with an all-star cast including Julie Walters, Patrick Stewart, Miranda Hart and Hugh Bonneville. On the same evening a Memorial to Agatha Christie was unveiled close to the theatre, in St. Martin’s Lane.

To celebrate the Anniversary there were 60 productions licensed around the world in places as diverse as Australia, Turkey, France, Russia, China, South Africa, Korea and the USA. Also, the first UK Tour of The Mousetrap started in Canterbury in September 2012 and continues to December 2016.

The Mousetrap has three entries in the Guinness Book of Records, including: for the ‘longest continuous run of any show in the world’; ‘most durable’ actor (David Raven, who played Major Metcalf for 4,575 performances from 22nd July 1957 until 23rd November 1968); and ‘longest serving understudy’ (Nancy Seabrooke, who stood by as Mrs Boyle 6,240 times until 12th March 1994, and actually did so 72 times). In March 1956, Peter Saunders sold the film rights, but shrewdly added the proviso that the film could not be released until six months after the end of the West End run. The film has yet to be made……….. The Mousetrap Challenge Cup horse race took place at the Devon and Exeter Races from 1967 to 1991 - Agatha Christie herself presented the trophy to the first winner – and at Sandown Park from 1995 until 2012.

Agatha Christie gave the rights to The Mousetrap to her nine-year old grandson, Mathew Prichard, before it opened, without having any idea of the extraordinary phenomenon it would become. Agatha Christie became a Dame of the British Empire in 1971; her books have sold billions of copies around the world – more than any other author, after The Bible. She died on the 12th January 1976 aged 85.

Peter Saunders, the original producer of The Mousetrap and of many other Agatha Christie plays, married Katie Boyle in 1979, was knighted in 1982 for services to the theatre; and died in 2003. In 1994 Sir Peter handed over his responsibilities to a new company, Mousetrap Productions, under the management of Sir Stephen Waley-Cohen.