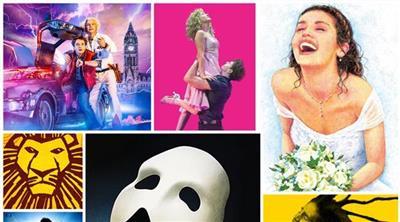 Great news abounds in theatreland, with many shows reopening sooner-than-expected, after the Omicron variant put a temporary hurdle in the way of the West End’s revival. This week, in the final instalment of our top picks for 2022, we’re showcasing exciting musical productions – surely what the West End is most famed for. If you missed the previous instalments of our 22 for ’22, you can catch up here, here and here.

Catch Pretty Woman whilst it’s in town. This classic Hollywood love story is performing at the Savoy Theatre on a limited run after its original run at the Piccadilly Theatre was cancelled due to the pandemic. The popular story of escort Vivian Ward is brought to life on stage by a fantastic cast, led by Aimie Atkinson and Danny Mac.

Oh, and the score is written by Bryan Adams and Jim Vallance – it’s great!

The Dominion Theatre is continuing its winning concept of seasonal runs, and this summer’s production of Grease is sure to be a sell-out success. Widely considered to be one of the best musicals of all time, this endearing favourite opens in May and runs to the end of October.

Choreography is by the inimitable Arlene Phillips, who is responsible for some of the most iconic dance routines in West End history.

You may have caught the film version on TV over Christmas, and if you did it’s sure to have got you in the mood for seeing My Fair Lady back on stage. The last major London production of Lerner and Loewe’s musical adaptation of Pygmalion was about twenty years ago, so you won’t want to miss this.

The London Coliseum – featuring the largest theatre auditorium in all of London – tends to present semi-staged productions to compliment the scale of the space. That said, expect lavish sets and beautiful costumes in this summer’s production.

Another one in the Dominion Theatre’s knockout run of seasonal productions for 2022. Dirty Dancing opens in a couple of weeks’ time, at the beginning of February and runs until the middle of April.

If you, like many of us, fell in love with the film, then don’t miss the opportunity to see this timeless holiday romance blossom on stage. If this doesn’t get you booking a summer getaway at Butlins, nothing will!

Just remember, nobody puts Baby in the corner.

Tim Minchin’s music and lyrics retell the popular children’s story in a magical way. Starring a cast whose average age is about 12, Matilda is back with a bang and proving that you mustn’t let a little thing like little stop you.

This show has some big dance numbers and is an exciting spectacle for the whole family, so don’t wait for when you grow up, book your tickets now! Sometimes you’ve got to be a little bit naughty!

Round the corner from Harry Potter is another magical tale that has been charming families for decades. This West End revival of Disney and Cameron Mackintosh’s Mary Poppins is supercalifra– you get the idea!

With new songs mixed in with the Disney movie soundtrack, you’ll definitely be humming a tune on the way home.

For fans of Charlie Stemp, book for as early in 2022 as you can. Charlie is currently performing the role of Bert, the chimney sweep, but there’s probably a cast change in the pipeline at some point this year.